Meet the Parents-Life in Cameroon

Meet the Parents-Life in Cameroon

Parenting is a very interesting phenomenon to me. Becoming a mother or mama as my little boy says, is all I had imagined and so much more. I’ve included a map of Cameroon to give you a visual of the areas I will be talking about. My biological father, Daniel, was a smarty, workaholic hands on, DIY, very playful kind of guy. He worked hard and played harder. He had a late 70s early 80s blue Suzuki motorcycle that I sat in front of on the weekends when we went to the movies. He was also my best friend. My American adopted dad is very smart as well, academic, teacher and more on the serious side.

Late daddy Dan was born and raised in Guneku, Mbengwi in the North West province Capital city is Bamenda. Refer to the map below to find Bamenda. When he was in a good mood, he would tell us adventures of his childhood as a young boy growing up in Guneku. Boy were they hilarious. I’ll share one with you that I thought was most remarkable and I never forget because it was also his favorite. He would always remind us how hard his life was but he was always number one in his class. So we had no excuse not to be the best. I had so much admiration for my dad and was proud to be his little baby girl, he was a very loving father. Loosing him at 17years old was very traumatic for me. 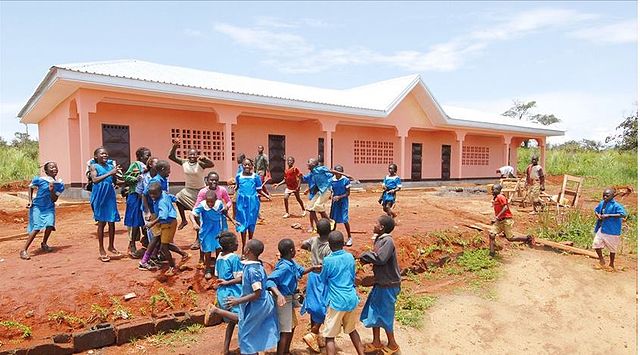 “…you kids have it easy now” he would say.

“When I was growing up I had nothing. I had to make things to sell on market days to pay for school, buy books, pencils and other school supplies. I missed a lot of school but I never failed a single subject. Matter of fact, I was number 1 in my class still no matter how many days I missed. During the summer I would make brooms, baskets, benches, stools and a lot of things to take to Ngong market. So that I have money for school. When school started I would pay what I had, stay in school till I got sent home when more money was needed. I would make some more things, however long it took to make enough money to return to school. I missed as many days of school as I was actually in school but I never failed any exams. I worked extra hard to make up for the time I missed and did really well in every subject. You have no excuse not to do well now…”

He is right to an extent. Parenting today poses it’s own unique modern day challenges that they also never had.

I have very vivid fund memories of Guneku where my late daddy Daniel was born and raised. Papa as we called him left the village in his late teens. He moved to Douala where his older brother, my uncle, papa Yunga was in the Cameroon army. Papa became an apprentice to one of the best mason/builder/carpenters in town. Douala is the economic capital of Cameroon and largest city. Papa lived with his brother Papa Yunga when he first left the village till he could go out on his own.
when papa was ready he started working for himself. Then he sent word to his parents in the village in Guneku that he needed a wife. I don’t know the story of how mom and dad’s marriage got arranged but it was arranged. Wedding was done in Guneku. Unlike in the United states where the woman’s family pays for the wedding, in Cameroon the man’s family is responsible. I don’t think mom and dad knew each other or ever met before the wedding. Mom’s from Ntuembeng, way up as high up the mountains as you can get in Metta. Let me tell you, it is a hike of a lifetime if you are into that kind of thing. Mama came back to Douala with papa after the wedding. I will talk to mama more about all this for the book.

Our compound in Guneku was huge. I always enjoyed the few times we went there for holidays with my cousins. We climbed trees, chased squirrels, picked fruits/nuts and made things to take to Ngon on market day. We also had a palm oil press so we made palm oil. We harvested palm nuts when they were nice and ripe with uncle Ben to make palm oil with. I don’t remember how many palm trees we had. It is the most versatile tree there is out there. We use hard spine of it’s leaves to make broom, we braid the leaves to make mats. The dry shavings off the tree we use as kindle for fire along with the dried seed shells and nut chaff after pressing. The nut itself we boil in a huge drum over and open flame and dump it in the stone press for the best cooking oil there it out there. When the palm tree is old and unable to produce we cut it at the base and extract the nectar for palm wine, the good stuff.

My very favorite of all was laundry day. On laundry day us kids took laundry to the creek a short walk away from the compound. I don’t think it was more than 15 mins walk. Each of us put our dirty clothes in a bucket we could carry, walked through the woods to the beautiful creek that was right behind the primary school. We could see the school from the creek but it was summer so school was out. Each person would find a big rock on which to wash clothes, rinse and dry them on the rocks. Then played in the water till sunset. It was a nice size creek with clean mountain waters. When our clothes were dry we fold everything and walk back home. That was so much fun. Maybe next time I will teach you guys how to make palm oil from palm nuts. How to make palm wine from an old palm tree that does not produce any more nuts so stay tuned.

Here’s a video I found on you tube, it is all in Metta so you can hear what my mother tongue sounds like. If anyone is interested in the translation, leave a comment requesting a translation and I will translate :).

If you are wondering why I mention Ngon as market day, here’s how that story goes. The Metta people(clan) are on a 8 day market cycle with certain groups having market on assigned market days. Keuh, Tan, Thad, Ku’u, Mbon, Eje’e, kwe, Ngong are the 8 market days. Guneku is one of the 29 villages in Metta and Central Metta or Medig Zone. It is bound by the villages of Mbemi to the South East. Nyen on the South West. I had family on my mothers side who lived in Nyen I walked there from Ngon market on market days., Wumnembug on the East and Chup on the North. The 8th day of the week Ngon is the market day which meets in Guneku. It was a bit of a hike for us to get there but it was the highlight of our week. Nobody misses market! “Tan” market meets in Ngamunghe, Mbon in Mbengeghang, Eje’e in Ngamunam and Kwe in Fringyeng quarters.

Welcome to Home Life Stories of Ageless Radiance and Beauty you can feel. The Beauty that starts from within and shines through with wholesome health, wellness and longevity-it’s all interconnected.  Sharing simple lifestyle changes to improve your quality of life. Stimulate your skin’s healthy rejuvenation process to even out skin tone and pigmentation. Be Agelessly Radiant. Let your inner smile shine through and let your inner child remain Ageless!! Eat the rainbow, try a new clean (aka kosher) recipe, make your own lotion and tooth powder with clay and egg shells, take a few tablets of vitamin c daily, soak in epsom salt, sit in the sauna, wear 100% linen, sleep 8 hours. Feel like a royal diadem, Delight of the King. Ageless Radiance is beauty you can feel!!!